Conference Entertainment at the National Museum of Scotland, Edinburgh

Reel Time Events recently provided conference entertainment at the National Museum of Scotland in Edinburgh. As part of the social program and evening entertainment for a conference at the EICC, we provided a whisky and gin tasting, a fighting display from Scottish fighting experts and highland warriors ‘The Clan’, and a Pipeband.

The museum after dark is like a kid’s dream. Or a Ben Stiller movie. Either way, it’s thrilling to be in that giant old building, wandering through the exhibits, secretly hoping something that isn’t supposed to move might just turn its head…

Reel Time was at the museum for a networking event as part of the social program for international delegates of a top secret conference at the EICC during the day. We had a whisky table, and a Scottish gin table, and an evening of Scottish entertainment planned for them to become more familiar with our country, culture, and traditions.

Each table featured a variety of drinks from different regions, and of different types, for the delegates to get the full picture of Scottish alcohol.

The Whisky table had Glen Moray, Laphroaig, Highland Park, and Old Pulteney. This allowed delegates to sample whiksy from all corners of the country and compare the differences in flavour. A Speyside Single Malt, an Islay Single Malt, an Orkney Single Malt, and a Highland Single Malt. There was a Whisky Expert on hand to explain whisky production and the distilling process to the delegates, as well as to provide drinking advice, such as how to properly add water.

The Gin table was also setup to provide some geographical variance. It featured Caorunn (Ka-roon), Edinburgh Gin, Hendricks Midsummer Solstice, and Lind and Lime (from The Port of Leith Distillery Co). The Gin was served straight up, no ice or mixers required, as a spirit taster. We had carefully selected smooth gins that are best enjoyed on their own to fully notice the flavours. Such as Caorunn, which is distilled four times in Aviemore, and so is super smooth. A Gin Expert was also on hand to explain the origins and production of each brand, and to provide tasting tips.

After 400 drinks had been finished, the international delegates were surprised by a demonstration from the Scottish fighting experts: Highland Warriors ‘The Clan‘.

In full warrior regalia, with real Scottish weapons, the four warriors were encircled by the delegates. They fought, taunting one another in that uniquely west coast way. They even picked an audience member to be dressed in the ‘Great Kilt’, and gave her the honour of fighting with them. 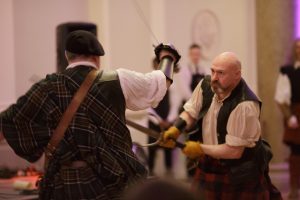 The Clan continued to fight to the ‘death’. One injured warrior tried to hide behind some of the international onlookers. Unfortunately, he wasn’t a very good judge of character, and the audience member stepped aside to revealed the Scot and make certain his demise.

After the battle, the Clan laid all of their weapons out for the delegates to come and chat to them about the history of Scottish fighting – apt to the delegates’ vocation.

To round out the evening, the international delegates were again surprised, this time by a Pipeband, who appeared from the depths of the museum and marched to the main hall for their performance.

It was another successful night of conference entertainment for the international delegates who were able to experience essential facets of Scottish culture and history up close and personal in one of Scotland finest venues: the National Museum.

We now have a page on our website dedicated to all of the Scottish Music and Entertainment we can provide at the National Museum of Scotland. Check it out here.

This site uses Akismet to reduce spam. Learn how your comment data is processed.