Reel Time Events were delighted to have been involved in the grand opening of the redeveloped National Museum of Scotland.

To start the day off, Reel Time Events arranged for the Boghall & Bathgate Pipe band to march down Chambers Street, which had been closed especially for the event.  After making their grand entrance, the band entertained the crowds, performing on the newly opened public piazza until the countdown began.  As the public gathered for their first glimpse of the new galleries, Forth 1 DJ Mark Martin started the countdown.  As the doors opened, 21CC treated the gathered crowds to an amazing pyrotechnic performance, with short range fireworks as well as glitter and confetti canons. 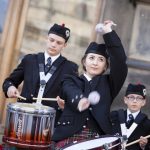 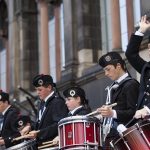 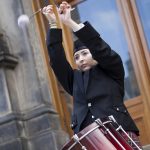 The pipe band continued to entertain for the rest of the morning, ensuring that all visitors got the same fantastic start to their new museum experience.  Whilst Reel Time provided the entertainment outside the museum, visitors explored the 10 new galleries showcasing some of the best of art, design, fashion, science & technology. 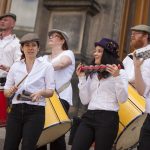 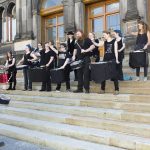 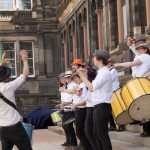 Shortly after midday the pipe band stood down to make way for the Beltane Fire Society Drummers & the samba band Amino who continued the live music and entertainment and celebration on into the afternoon.

We are now looking forward to seeing what the final stage of the museum masterplan will bring when it opens in 2018!

This site uses Akismet to reduce spam. Learn how your comment data is processed.